Once upon a time, a company called NextBase wrote some software to help people plan routes across the road network, using a computer. It was expensive in the day (£130 in 1988 works out about £300 in today’s money), but if your job was to schedule travelling reps or delivery drivers, then time was money. Or money was time saved.

Anyway, Microsoft bought the company and brought out Microsoft AutoRoute in the UK (eventually renamed Streets and Trips in the US) and did a modestly brisk trade selling annual versions of the software for a more reasonable (£40 or so) amount, with updates to keep the maps fresh and to add improving functionality.

All of this pre-dates the arrival of Multimap, Bing Maps, Google Maps etc. Nowadays the man in the street can make routing decisions on browsers or phones, free of charge and even taking account of prevailing traffic conditions, generally free of charge.

Nevertheless, the AutoRoute and S&T products soldier on, surprisingly. AutoRoute 2013 can be bought for £39 naked or £85 if you want a plug-in USB GPS module. MapPoint and Streets and Trips are still available for American users. Just don’t try and stick the PC to your windscreen.

The zooming in & out is a big agricultural compared to the Deep Zoom style navigation in and out of Bing or Google Maps these days, but there’s a lot of data behind the app and it’s very usable when it comes to searching and setting particular options – showing how much your journey will cost in fuel as well as how long it will take, for example…

There are a few key reasons why it makes sense to have AutoRoute instead of relying on online mapping – it’s all available offline for one, it responds comparatively quickly (especially when rerouting via specific places) and it also can show you easily what’s in the neighbourhood of a given point – though some of the data may not be as up to date as online sites.

You can export *.axe routing files to *.gpx using AutoRoute 2013 (or use free 3rd party software ITN Converter to turn out a version for most popular satnavs – so you could spend a while poring over a pan-European route in

AutoRoute then squirt it down to your TomTom so you end up following the exact route you want, rather than sticking to the motorways, as the device might insist)… though as yet no route mapping is exportable to Nokia’s Here Drive software so you can let your phone guide you.

Interestingly, you can also overlay further data onto AutoRoute maps – maybe Excel spreadsheets full of postcode-oriented data, or even the simple mechanism of plotting all your Outlook Contacts on a map – maybe useful for seeing which of your customers or partners are based nearby a place you’re going. Or where to wind up the windows and keep driving… 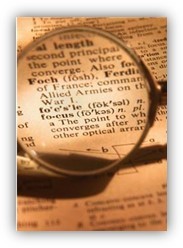 Previous ToW entries have covered the need to sometimes tell Outlook to pipe down and let you get on with what your job is supposed to be. Where, after all, does it say on your job description, “Sits in front of a screen reading & writing email all day”?

The Pomodoro time management method is one potential solution to the problem, where the user forces themselves to focus for a period of time by avoiding distraction. The continuously excellent series of Photo Tips from Robert Deupree (JR) featured a simpler solution… 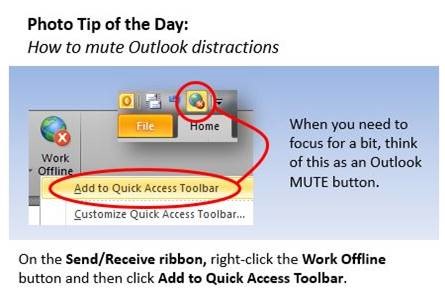 Robert also recommends a shortcut for the keyboard junkies so dedicated to extreme productivity that they can’t afford to lift their hands away to touch a mouse – to toggle Online and Offline modes in Outlook, simply press ALT+S then W.

When Outlook is offline it obviously won’t receive any new email, but it will let you work on existing mail, calendar etc and you’ll still be online for Lync distractions, and able to while away time browsing the web.

Whilst on the subject of Outlook and distractions, do yourself a favour and switch off the new mail alert – it’s even more intrusive in Outlook 2013 than previously. We all get enough email that we don’t need to know when another one has arrived, so try it now and you can always switch it back on if you feel that nobody loves you anymore.

Simply go to File / Options / Mail within the main Outlook window, and tweak the settings as required:

If you’ve taken the plunge and updated to Windows 8.1, you may have spotted a mix of improvements (like the updated Search pane behaviour which needs a little getting used to, but works well), and some funnies (compatibility issues with IE11, internal tools like GMOBI or CRM not working so well, etc). All in, a happier upgrade but one which is quite clearly still a preview.

Now, one of the first downers some people have spotted is the fact that the Search charm has nabbed the WindowsKey+S combination – it makes more sense than Win+Q, so what’s the rub? Well, OneNote uses WindowsKey+S to grab portions of the screen, either for pasting into notebooks or just sticking the screen grab into the clipboard for later use.

There are alternatives to the handy OneNote process; like using the Snipping Tool, though like many other such utilities, it can’t grab portions of the Modern UI apps. Never fear, a solution is at hand…

If you’re a fan of Win+S, you can re-establish a way of screen grabbing by following the steps below…

· Fire up a PowerShell windows with admin privilege – press WindowsKey+X, and select Windows PowerShell (Admin) from the list. (note that in Windows 8, this option was “Command Prompt (with admin)” – is the shift to PowerShell in Win8.1 the death knell for the black-background command line?

· Either reboot your PC, or…
… kill off the Send to OneNote Tool (32 bit) application from Task Manager (press CTRL+SHIFT+ESC), then restart the application by pressing WindowsKey+R and entering ONENOTEM.

Now, you should be able to catch a screen grab by pressing WindowsKey + A. Not as obvious as Win+S, but it’s better than nothing.