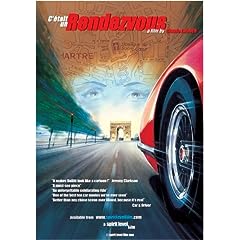 Someone has taken the petrol-heads’ classic film, a 9-minute dash through early morning Paris known simply as “Rendezvous“, and built a mash-up between Google Video and Google Maps, to show the route he was taking. Who needs another excuse to watch this film? Well, you’ve got it now.

Rendezvous, if you hadn’t heard the story, was a film shot by French director Claude Lelouch, allegedly driven by a professional driver at the wheel of Lelouch’s Ferrari 275GTB. In reality, it was a Mercedes saloon and it was Lelouch himself driving, and later dubbed the soundtrack (though it does sound pretty realistic to me).

Legend has it that he was arrested immediately following the first showing of the film: no surprise, since what it shows is completely illegal – driving at over 100mph through red-lights, the wrong way down one-way streets etc. It’s still strangely compelling, though, even if you know it’s a bit of a fake…

(thanks to Steve for the link)